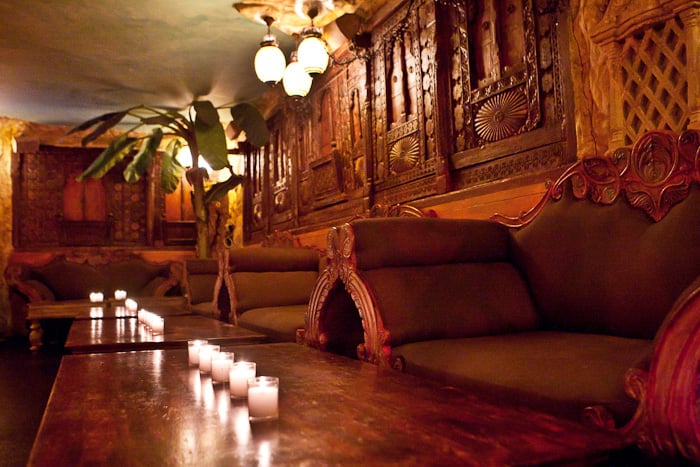 Moon City Lounge Bar
Master J spoils me every year for my birthday. I think he likes the look of shock and awe on my face, along with the worshipping that comes after. This year was no exception. Between the small (but sexy) wrapped gifts I received, and having my brother show up on our doorstep in Paris after nine months of not seeing him,, I was pretty flabbergasted by the end of the week. I will say, now that my brother has departed and we’re back in Dijon, I finally have the time to sit and reflect on the whirlwind of surprises that overtook me for the last ten days.

Part of that reflection includes getting back on track, as I don’t want to leave any of you sex enthusiasts hanging. I will start this week off with my first Parisian sex club experience. Prior to my brother arriving, Master J had two places lined up; the first being Moon City.

I had been warned that it would be a “nude party,” and was considered the best sex spa in Paris. I will say, the appeal begins on the outside, with the entrance looking like something out of an Indiana Jones film. Upon entry, it only gets more dramatic…but first, you must pay.

As mentioned in Sex Club Prep, Master J and I only go to sex clubs on nights that single men are prohibited. So, as a couple we paid 68 euros for full day/night entry, which inlcuded six free alcoholic beverages per couple (from a select list).

Because we arrived around 630 pm, we were the youngest of the very few couples there. We wouldn’t learn until later that people don’t show up until 9ish; since that’s the time dinner is served – yes, they have a buffet in their sex club. And it’s delicious! Salads galore, which is quite brilliant, actually, as I wasn’t walking around all bloated after the fact.

The club itself is quite astonishing. After being assigned a locker, and removing your clothes (you’re given a wrap to put around your naked body should you wish), you head downstairs. The bar is the point of entry. It is the brightest place in the club, as the rest is dimmed, red lights spilling onto the walls and floor, luring you deeper down the hallway. The bar is lined with beautiful brown leather couches. They sit against wood walls with intricate engravings.

Beyond the bar is a jacuzzi. Unfortunately for the first few hours we were in Moon City, the jacuzzi wasn’t heating up. The staff, however, was quite generous, and as a result of this inconvenience, offered us more free beverages. I happily accepted.

Behind the adjacent wall of the jacuzzi are showers, and a staircase leading up to the sauna and cuddle rooms. Sexual activity is permitted in all areas minus the jacuzzi.

Now, although there was a consistent amount of sex being had in the cuddle rooms, it wasn’t until after 9 that the party really started. It also wasn’t until after 9 that I really recognized how popular Master J and I are in places like this. I’m not trying to toot my own horn, but we are a pretty magical couple – and quite attractive, if I do say so myself – so, I really had to embrace the fact that, even though we came on couples night – this is a swingers bar, afterall – we were the main targets.

The first man who approached me came when Master J was ordering us drinks. It’s been a pattern – they  wait for Master J to leave before making their move. The man was probably my age, and he was accompanied by his girlfriend. Turns out she found me quite attractive. It was flattering, but, as you know, I’m not interested in the male baggage. Dump the dude, and then we can speak about it.

The truth is, there were some beautiful women there. I’m not trying to be harsh, but Master J and I spoke after, and if we had switched, it never would have been a fair trade. I, for one, would have felt incredibly cheated. He gets the beautiful women, while I’m stuck with their leftovers? We weren’t down. So, we rejected everyone, leaving a wave of disappointment amongst them. That is, except for the girl who had earlier found me beautiful. She, so very kindly asked if she could feel my breast. When I said yes, she giggled with excitement, and admitted, “I’ve never felt such large, natural breasts before. Thank you.” I truly felt I’d done a good deed. That was until later, when her man put his hand up to catch my breast as I was leaving the sauna. I had to block him. Block him!

So, after all of this craziness, Master J and I decided to go into one of the very few cuddle rooms with a lock. At first it was relaxing and enjoyable, that is until I looked over Master J’s shoulder to see peering eyes through one of the holes in the shutters. It was the same man who tried to take a grab at me. So, what did I do?  The only thing a woman in my position can do – after kindly telling him we don’t want to be watched, and him continuing to do it – I poked him right in the eye, then stuffed my towel in the hole.

Don’t get me wrong, I like to be watched on certain occasions. For example, at the Oasis Aqua Lounge in Toronto, I very much have enjoyed putting on a show for passersby; however, there is a different level of consent and distance between you and others there, as opposed to the sex clubs I’ve experienced in Europe.

As much as that one particular man was a nuisance to me, there wasn’t a single moment I felt unsafe. It was a very secure and semi-clean place to be. I say “semi” only because the people don’t necessarily clean up after themselves before leaving the cuddle rooms. Which means, if you are desperate for some private, sexy time – like Master J and I were – be prepared to be moving a condom or two out of the way before getting there.

Master J and I aren’t swingers. We simply love the ambiance of clubs. Being in a sexual environment can be quite exhilerating for the two of us. As well, we are both very open in speaking to people and exploring diverse lifestyles through conversation. We understand that this may be frustrating for some poeple that we come across – especially considering this was specifically a swingers club, and we tend to be on high demand.

All in all, Moon City was a cool place to be. The moment you walk in, you forget you’re in Paris. In fact, you forget you’re in France, with the mysterious and temple-like decor. They’ve done an incredible job at keeping the ambiance peaceful, regardless of the nudity and sex that’s going on. As well, the division between the sex area and bar offers diverse atmospheres, depending on what you prefer, or what mood you’re in. You can go back and forth as you please. Generally speaking, Master J and I aren’t too fond of steam rooms or saunas – we don’t care for extreme temperatures – but if it’s something you like, this place won’t disappoint you in that regard.

If you ever find yourself in Paris with nothing to do, I definitely recommend Moon City – but do your homework, otherwise you may have a thousand peering eyes, instead of just two.

Have you ever been to a sex club? Tell me about your experience!

Call of the Quean Facbook Page

Call of the Quean Facbook Page

There was an error retrieving images from Instagram. An attempt will be remade in a few minutes.